Summer is so close I can almost taste it! So what better time to celebrate? This month, our kick-ass lead designer — the one and only — Sean Quinn will be celebrating his six-year anniversary with Dc Design House. SIX YEARS, Sean!? From work-term student to senior graphic designer, my man Sean has been here through it all! He’s going to tell us a few things he’s learned along the way.

Before the first anniversary

I can’t believe it is already my 6 year anniversary! Where to start? In my first six months at DcDH, working with Dc and the wonderful designers, I learned a lot. It felt like two years of school work got wedged into a six-month span. It was crazy, intense, and fun as hell!

I still remember my first official project as a graphic designer — The Quikprint sign — and when I see it hanging up on the side of the CLB armoury, to this day it makes me smile.

The bumps in the road

Now my start wasn’t exactly smooth; I made some mistakes — some expensive ones at that. I made a typo. It went to print, and a bunch of printed units later, the mistake was finally noticed.

In school, mistakes were okay (and free). Not the case in the real world. I was destroyed — I felt like I let the client and my team down, and my faith in my work took a hit. So how did I react? I went on the defence, saying it wasn’t my fault, other people should have noticed this, blah, blah, blah. You can imagine how that went over…

Around this time during my junior years, my head got big. Like really big. But I learned a good lesson in the end and I’m glad that I had a team of people that — despite me not being on the same page — believed in me and saw something that I didn’t.

Needless to say, I came back to earth after a wonderful trip home for the holidays when my mother told me, “Get back that passion you had when you called us to say you got the job”. She was right — I had never been more excited than when Don-E told me I would be joining DcDH full-time. Every day is a happy anniversary here.

With a new outlook, I came back to work ready to kick ass. I let go of my attitude and embraced collaboration with others. I’ve been having a blast ever since.

Later that year I went on to do my best work yet. I started designing websites (which is a huge passion of mine), I dropped the junior title, and helped bring an Ice Award home to the team. Now I’m the Senior Designer, and I get to work closely with our amazing designer, Michael Hollahan. I’m pretty lucky. 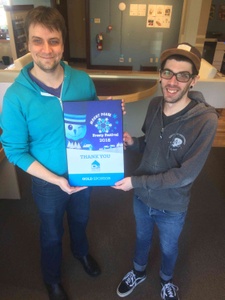 So the moral of Sean’s story is… stay humble. Don’t ever think you’re mightier than the person sitting next to you. If you’re fresh out of school, keep a cool head and learn from those around you. In a creative environment like ours, being stubborn gets you nowhere! Collaboration is key and soooooo much fun.

Check out some of the designs that Sean and the team are pumping out daily here on our website or our social media channels. Happy anniversary, Sean! Keep making us all look so good.

Read some of our related posts and projects.